I returned from China on Friday 11.11.11. Waking up in Beijing and returning to Ashland all in the same day made my 11.11.11 40 hours long. Best way to recover from jet-lag– schedule a concert. The Cascade Clarinet Consort had its premiere concert on Monday. The shared concert with the Siskiyou Saxophone Orchestra made for some great photographs. 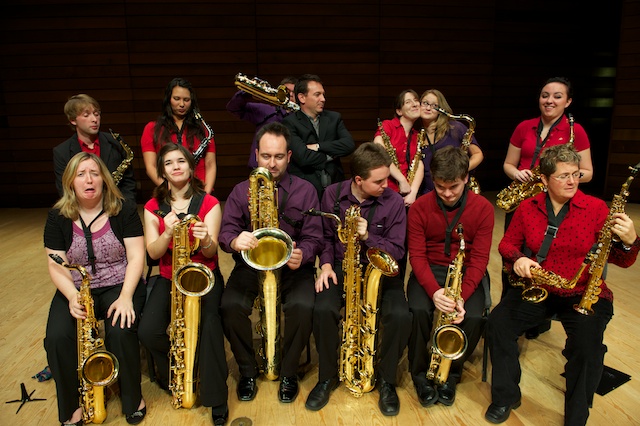 from the final Concert in Chengdu

I had the morning free in Beijing before teaching so I walked to a shopping mall.

More from the Chengdu Saxophone Forum

I taught a master class to 150 saxophone students today in Chengdu. Tomorrow I’ll give a lecture to the same students.

I watched, and participated, in drumset learning at the third grade level in Huijia primary school.

I visited SOU alums Eric and Erin at Huijia school in Beijing where they are teachers. Erin studied saxophone with me and was on the 2007 SSO tour to China. It was good to see her again and meet Eric. They have become excellent teachers, loved by both students and colleagues. 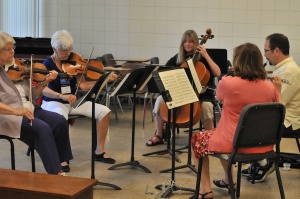 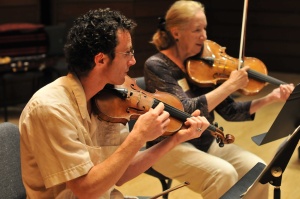 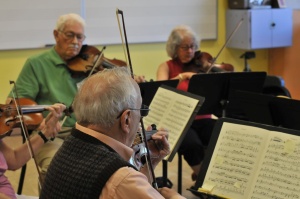 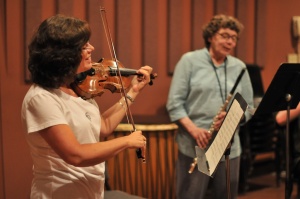 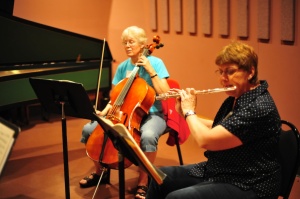 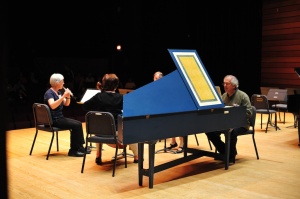 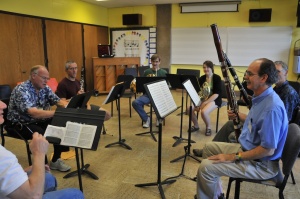 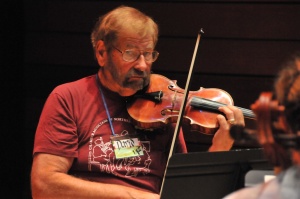 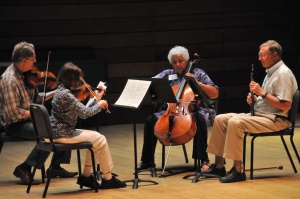 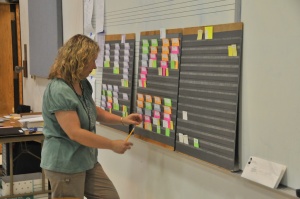 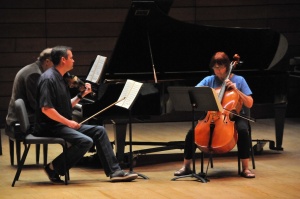 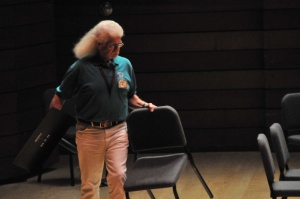 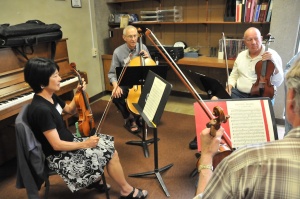 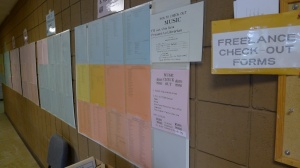 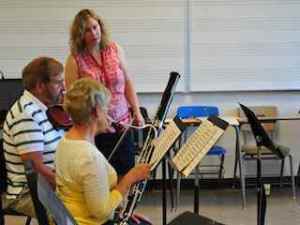 (Ashland, Ore.) –The Siskiyou Saxophone Orchestra, under the baton of guest conductor Dr. John Bleuel, will perform the challenging new piece, 10+1 by French composer Lucie Robert on Friday, May 20th at 7:30 PM at the SOU Music Recital Hall. Audience members are invited to a cake reception following the concert. There will be a second performance in Grants Pass at the Rogue Building on the Rogue Community College Campus Saturday, May 21st at 7:30PM.

Lucie Robert’s wrote 10+1 in 2009 specifically for conductor-saxophonist Dr. John Bleuel and pianist Dr. Linda Li-Bleuel. 10+1 features eleven solo instrumentalist–ten saxophones and one piano–in cooperative opposition, to create a sonic soundscape like no other. Also featured on the concert will be music by the Oregon composers: Swingin’ Clarence et ses oiseaux domestiques by Theodore Dollarhide, Nocturnes by Mark Jacobs, and In Memoriam Sacagawea Aria Steinke. The artists are part of the Oregon Chapter of the National Association of Composers USA.

The Siskiyou Saxophone Orchestra (SSO) is a collaboration of students, faculty, and staff at Southern Oregon University. Under the direction of Rhett Bender, Professor of Music at SOU, the SSO arranges, composes and commissions music of all styles and musical periods. Members of the SSO recently traveled to the Sichuan Conservatory of Music to perform a recital and visit Beichuan, the site of the devastating 2008 earthquake.

Tickets for this performance are only $5 for general admission and free for students. Tickets and season passes may be purchased by calling 541-552-6101 or at the Music Box Office prior to the performance. For more information, please visit Southern Oregon University’s Department website at http://www.sou.edu/music. 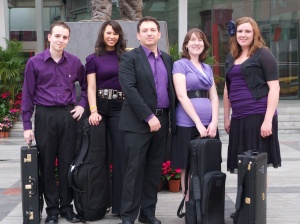 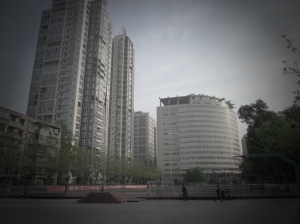 Joseph Murphy has been the saxophone professor at Mansfield University of Pennsylvania since 1987. He has also been director of bands, department chair, and taught a variety of courses. He received the bachelor of music education from Bowling Green State University (OH), and the masters and doctorate degrees from Northwestern University. Dr. Murphy was the music director of Tiffin (OH) Calvert High School from 1983-85. In 1985‑86 he received a Fulbright Award for a year of study in Bordeaux, France where he received a Premier Prix. In June 1996 Dr. Murphy performed a solo recital at Lincoln Center. He has performed in 13 countries including Australia, New Zealand, Thailand, Taiwan, Japan, Greece, and several countries in western Europe. He is a clinician for the Selmer Corporation and Rico Corporation and has been recorded on Erol (France), Mark, and Opus One labels. Dr. Murphy’s memberships include Music Educators National Conference, Music Teachers National Association, North American Saxophone Alliance, National Association of College Wind & Percussion Instructors, College Band Directors National Association, Phi Mu Alpha, and Kappa Kappa Psi. His award winning website is www.saxophone-education.comhttp://www.saxophone-education.com>

Matthew Slotkin is an acclaimed performer, teacher, and scholar, and has appeared in leading venues throughout North America, Europe, Asia, and Australia. He has achieved success in solo performance, chamber music, and as a soloist with orchestra. A commitment to the promulgation of new compositions has resulted in numerous premieres of works by composers including John Anthony Lennon, Scott Lindroth, John Orfe, and many others. Recent performances include tours of New Zealand, Australia, the United Kingdom, and Greece, as well as concerts at the Piccolo Spoleto Festival, the Monadnock Music Festival, the Hartwick College Summer Music Festival, the Guitar Foundation of America, the Chautauqua Institution, and the World Saxophone Congresses in both Thailand and Slovenia. He has given performances with many prominent chamber ensembles including the Metropolis Ensemble, the Mallarmé Chamber Players, Duo Montagnard (with Joseph Murphy, saxophone), and Dez Cordas (with Craig Butterfield, double bass). American Record Guide praised Slotkin on his Centaur Records release, Twentieth Century Music for Guitar, for his “musical sensitivity and technical control,” and for giving “strong readings of this appealing music.” Soundboard magazine called him an “exceptional” player, and a recent concert review from the Classical Voice of North Carolina stated that “Slotkin performed brilliantly.” Centaur Records released his new recording with double bassist Craig Butterfield, “Dances, Songs, Inventions,” in February 2010, which was called “wonderful” by WRUV radio (Burlington, VT). Slotkin directs the guitar programs at Mansfield University in Mansfield, PA and Bloomsburg University in Bloomsburg, PA. He has given masterclasses at numerous institutions and festivals including the Oberlin Conservatory of Music, the University of Melbourne, the Alexandria Guitar Festival, and many others. He received the Doctor of Musical Arts, Master of Music, and Bachelor of Music degrees from the Eastman School of Music, where he studied guitar with Nicholas Goluses and historical performance practice with Paul O’Dette.

Tickets for this performance are $15 general admission, and free for all
students. Tickets or season passes may be purchased by calling
541-552-6101
or at the Music Box Office one hour prior to the performance. For more
information, please visit Southern Oregon University’s Music Department
website at http://www.sou.edu/music