It was pouring rain today so Brent and I spent a lot of time riding the subway to different areas of Beijing. After eating sushi for lunch, we traveled as far north as possible by train. We then took a taxi to reach the Olympics Sports venue in the northern most part of Beijing. The grounds were still under construction and off limits but we got a glimpse of the track and field “birds nest” and the aquatics center. For dinner we ate at Hakka along Qianhai lake. 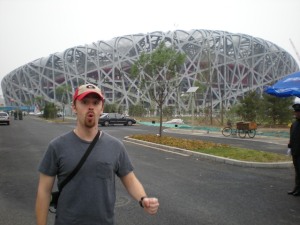